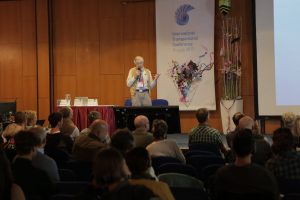 The Origins and Future of Holistic Cosmology

Western philosophy has origins in the spiritual technologies of ancient Greek mystery religions. The ecstatic, psychedelic ritual of the Eleusinian Mysteries promoted an experience of death and rebirth that inspired dramatic insight into the nature of things by opening new eyes upon the world.

Besides bringing renewed perspective to topics such as the mind-body problem, the nature of experience, and of space and time, ecstatic experience can keep us from prematurely closing accounts with reality, per William James’s warning, on many other topics of philosophical and metaphysical investigation.

Alfred North Whitehead is the singular modern philosopher whose cosmology readily affords a framework for psychedelic exploration of cosmology. Similarly to Stanislav Grof, he says that the present moment of the soul “holds within itself the complete sum of existence, backwards and forwards, that whole amplitude of time, which is eternity.”

Whitehead suggests a new cosmology that conceives the fundamental realities of the universe not as bits of inert matter, but as occasions of experience such as spiritual technologies illuminate. His new cosmology holds promise for solving the paradoxes of modern science by imbuing deliverances from ancient mysteries.